See our trailers in action

More than great looks, Castleton’s uni-body gravel trailer design makes it easier to wash away the road salt and dirt build up. The steel sloped fenders also move gravel down and out of the middle of the suspension area to make sure that your load is in the hopper instead of on the trailer.

The hoppers on the Castleton gravel trailer are made to last.  We use only Strenx High Performance High Tensile sheet steel in all of our hoppers and side walls. This gives you the assurance that you will have one of the strongest and lightest trailers on the market. Our wireless gate control ups the safety factor and also allows for quick switch to other trucks. 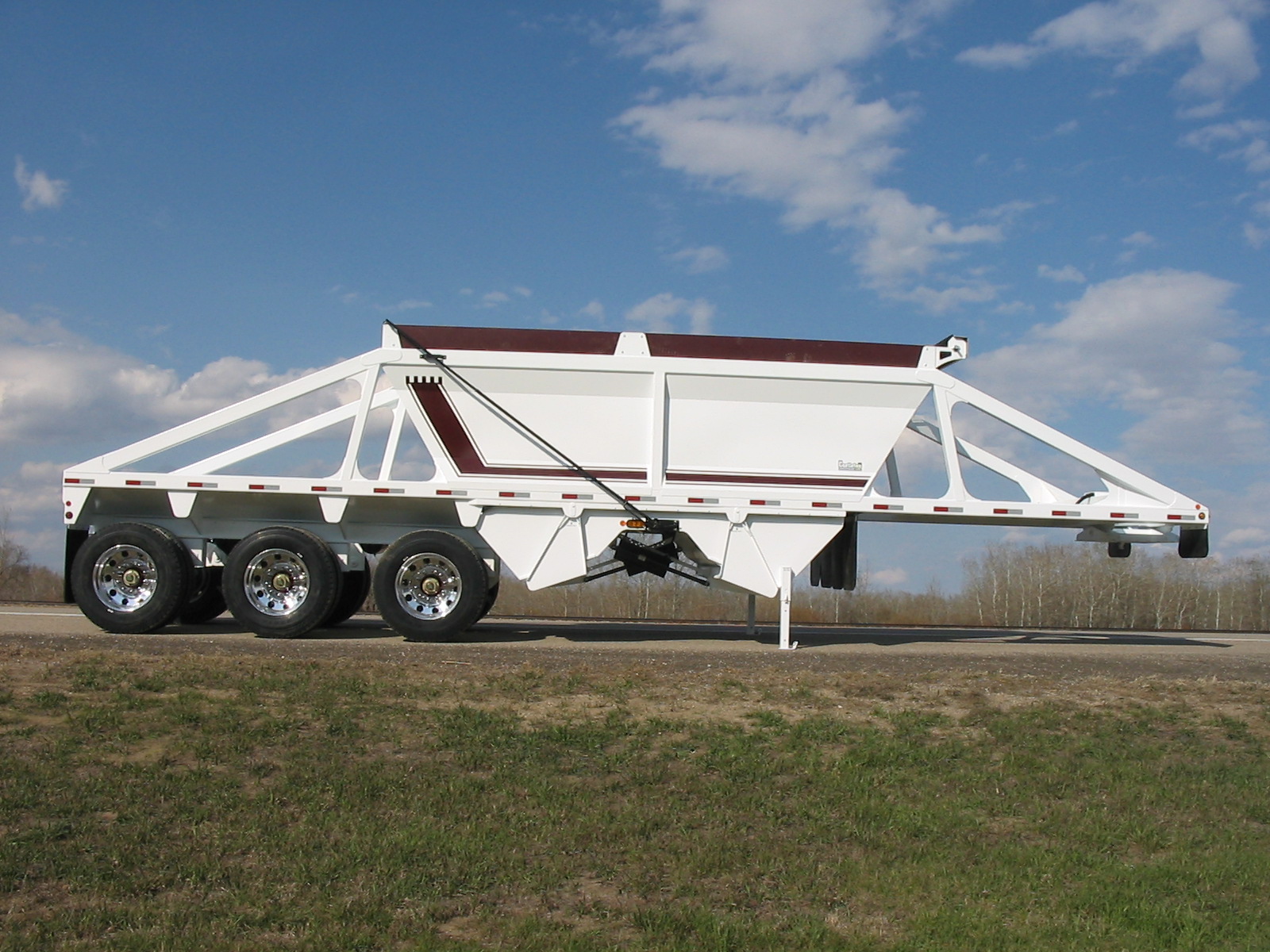 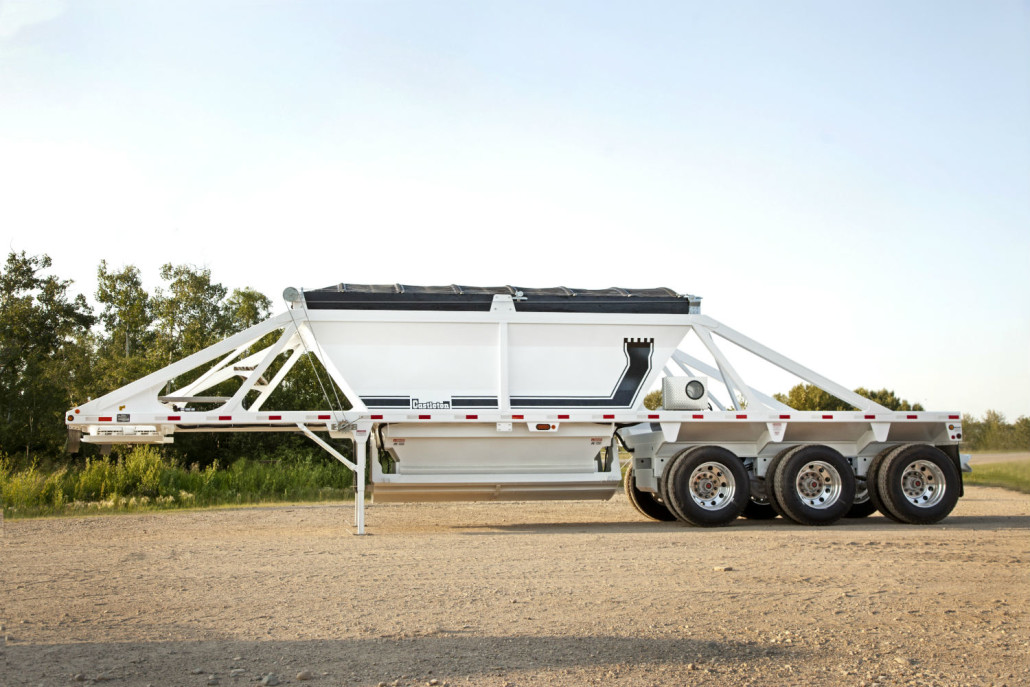 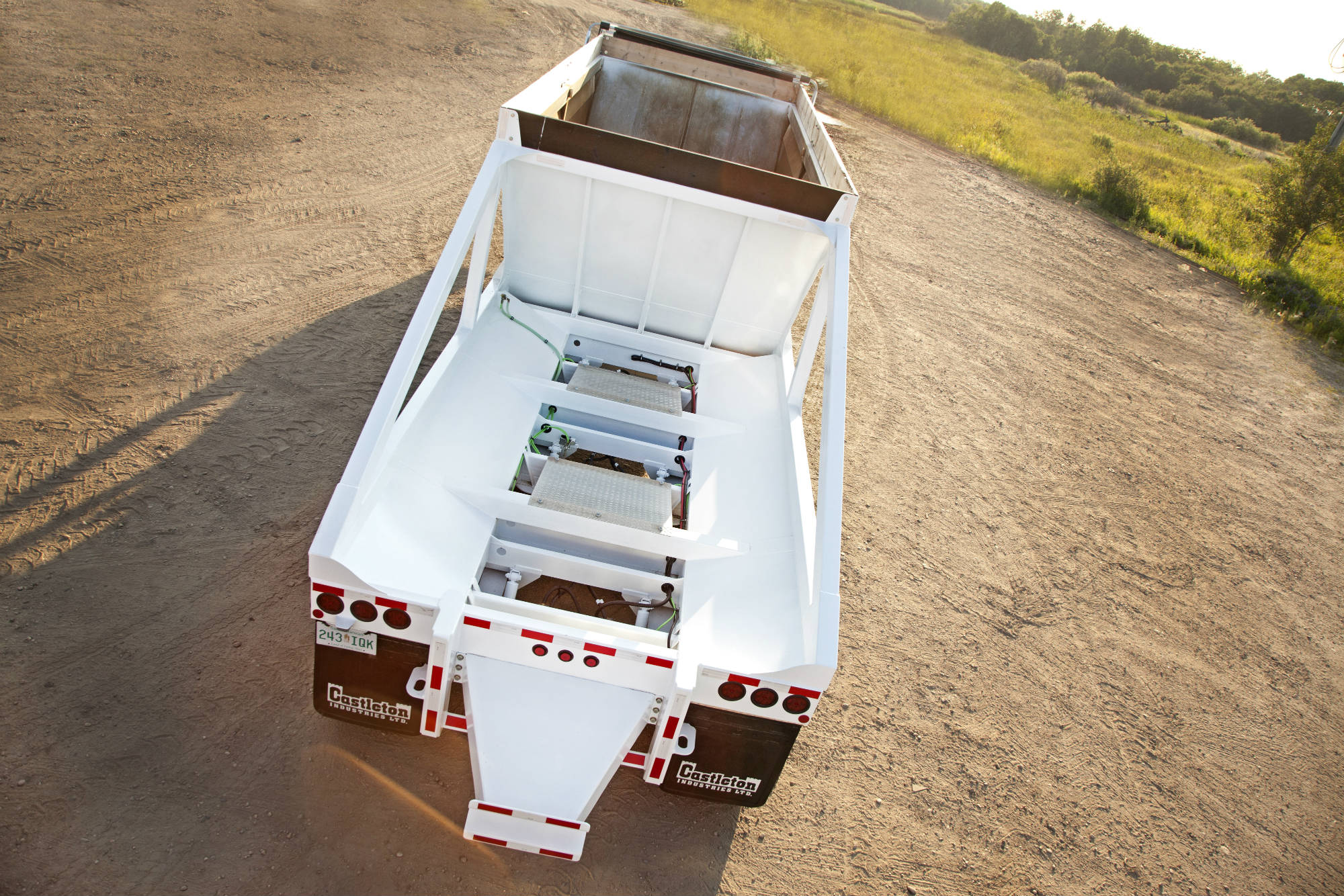 Road gravel, A-base, asphalt – prices are always going up. As that happens, your customers get more particular about product placement. Castleton cross dump gravel trailers have been designed to give you excellent control and an even spread pattern.

The two hopper cross dump trailers are available with optional individual openers. This allows you to split loads because you can open one gate at a time. You can unload a thin spread at low speeds. A very nice option in and around the yard. An asphalt wing option is also available. This lets you make excellent windrows.

The unibody design makes Castleton gravel trailers tough and light. The sturdy Castleton tandem is versatile, maneuverable and easy to load. It has 22 yards of capacity and is only 30′ long by 9’3″ high. Virtually any farm tractor can load it, and the 30′ length makes this Castleton tandem very maneuverable for those tight pits or farm yard locations.

The Castleton tandem and tridem cross dump is ready for any type of work that you throw at it. Clean up the sand pile today, spread gravel for the RM or township tomorrow and next week, drop the asphalt wings to windrow asphalt for the city. Ideal for all types of township / RM and private contract work. 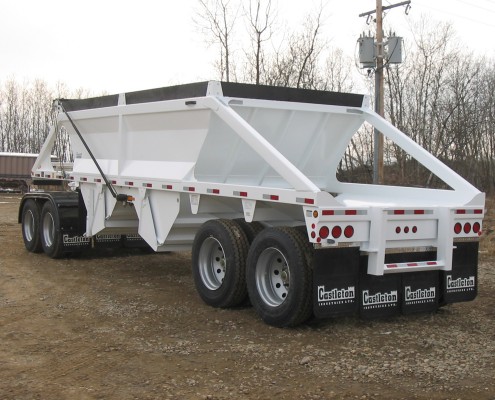 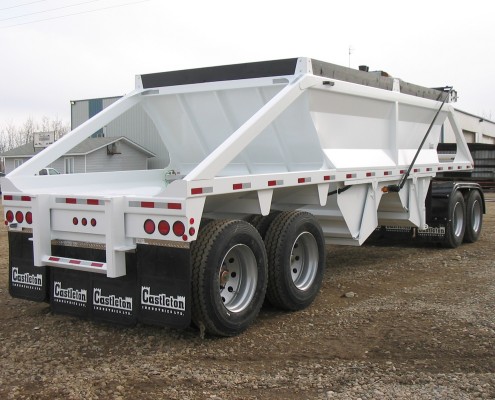 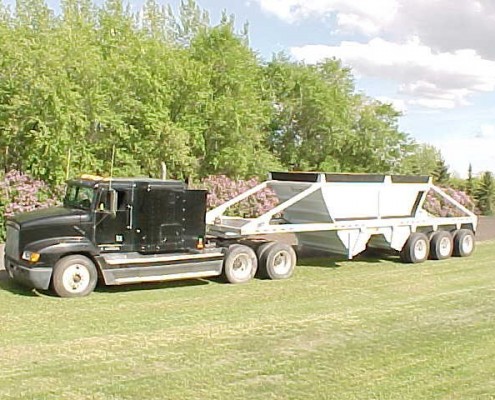 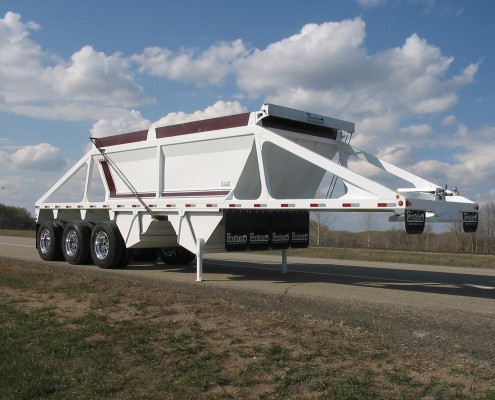 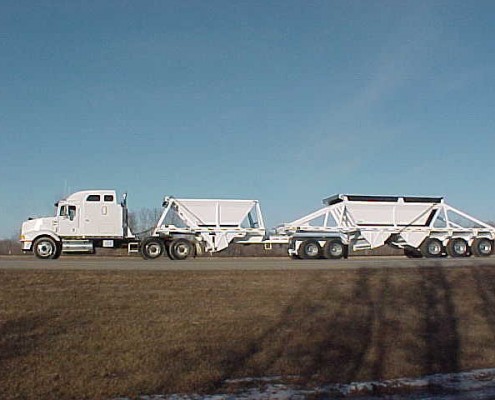 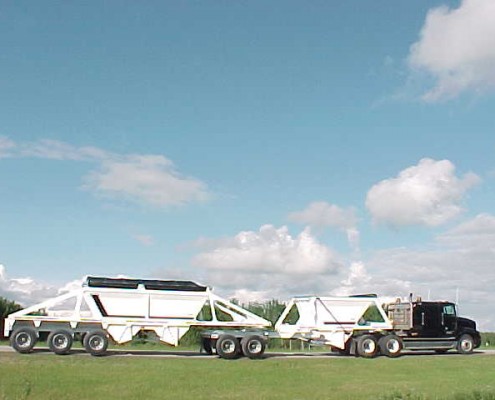 Many people think that the auto industry was the first to use the unibody design concept. In actual fact, the concept is much older. It goes back to the days of the Vikings. Their unibody ships were light enough to navigate hundreds of miles inland, on shallow rivers. They were fast, maneuverable and carried huge cargo loads. As for strength, those beautiful ships could pretty well take anything the North Atlantic could blow at them. The Vikings expected a lot from their ships and the unibody design didn’t let them down.

Today, contractors expect a lot from their gravel trailers and Castleton’s unibody design fills that need. Castleton trailers are tough and rugged, yet clean and sleek in their appearance. They also have good road handling qualities on and off the road.

There are times, during the road building process, when you don’t even want to see the punishment your trailers are getting. However, it’s got to be done. It seems that contractors are depending more and more on trucks and trailers to go and do what tractors and scrapers did in times past.

The Castleton is designed to do the hard hauling and the unibody design helps optimize payload and strength.
If you want to haul sticky clay, goop, gunk, A-base, asphalt, – whatever, wherever, – choose the Castleton clam. It’s got an awful big mouth (55″ x 96″) with as much ground clearance when it is open as when it is closed. Fewer hang up problems.To give you extra shock protection, the clam opens against mechanical stop in the full open position. 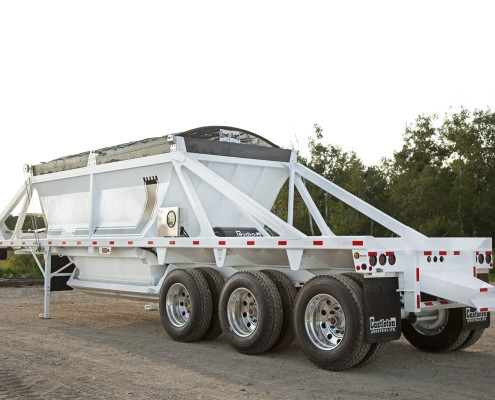 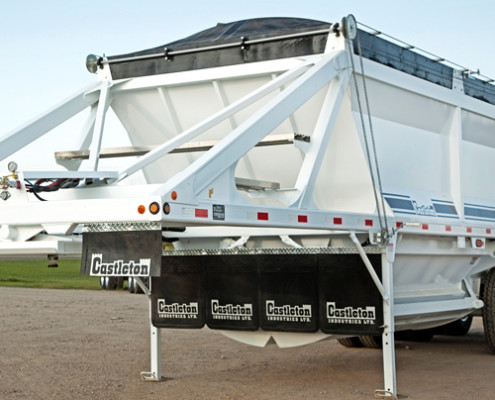 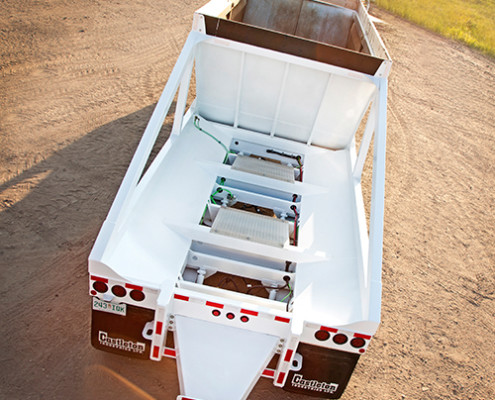 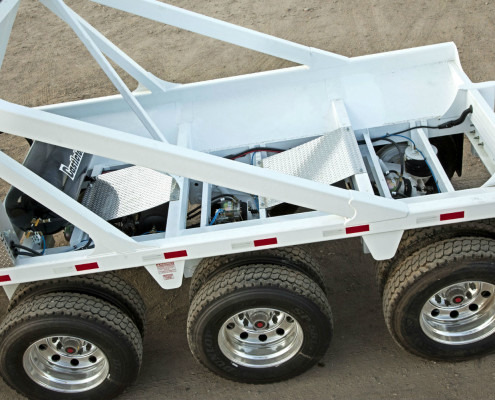 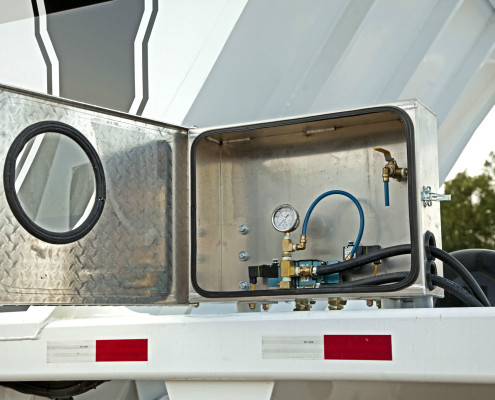 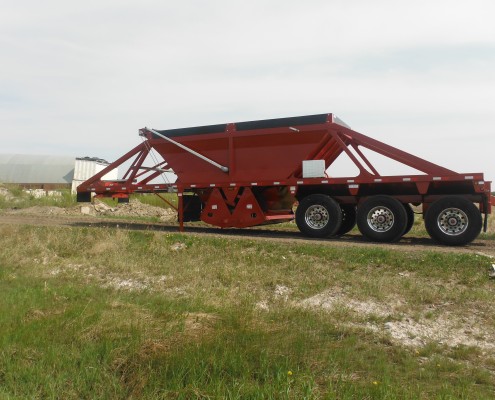 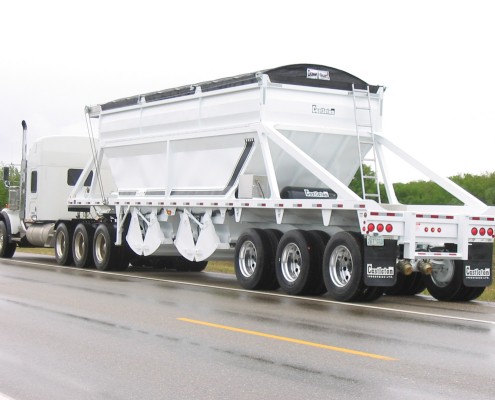 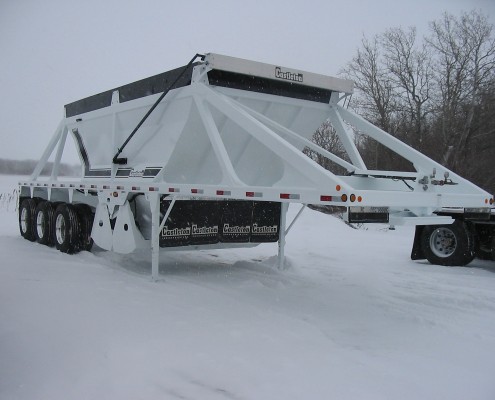 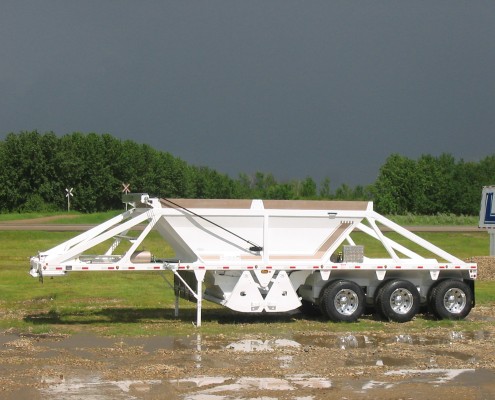 Our customers loved our clam but need to be even more flexible with the jobs that they were bidding on so we designed the Cross Clam.  This trailer will do anything that a cross dump and clam can do.  You can gravel roads, haul pit run, A-base, and even use it for paving.  We have many paving crews that will specifically ask for the cross clam due to the versatility that it brings to their fleet.

The Castleton electronic clam control is designed to keep you moving. Our trailers come with a 6 pin front mounted plug that is ready to receive the customer’s control cable (please ask your local dealer for a wiring diagram to ensure that your cable is wired the same as the trailer) or for a complete from factory solution, an optional cab mounted contol panel with open – stop – close and override.  We also are proud to say that as of 2016 we have an (option) completely wireless remote system, to control your gates so that you can move from truck to truck without the need to keep wiring in switches for the trailer.

With either of these setups, the driver can open the gate from the cab to an adjustable, preset opening width to dump, then override the preset opening to clean the last bit of asphalt off the gates – without stopping or leaving the cab.

Super-B’s have become the unit of choice for the aggregate hauler as well as paving crews.  Our hauls are getting longer and more payload is needed to make the job deadlines.

The Castleton Super B was designed with these factors in mind and is found all over Western Canada in many different work areas.  We can custom design your Super B to fit your exact needs. 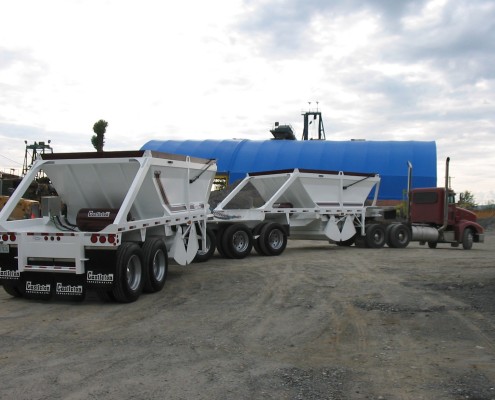 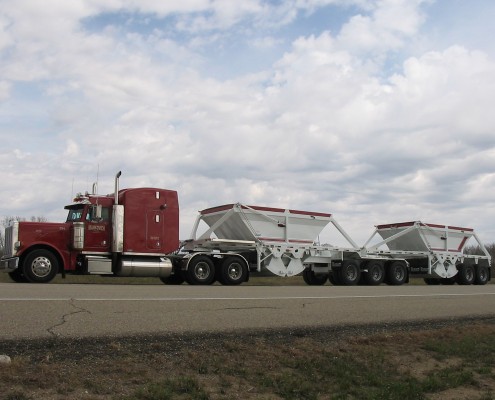 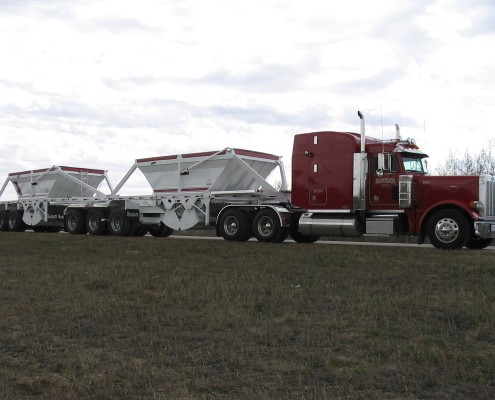 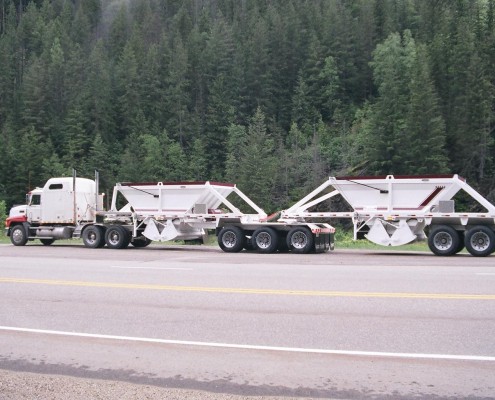 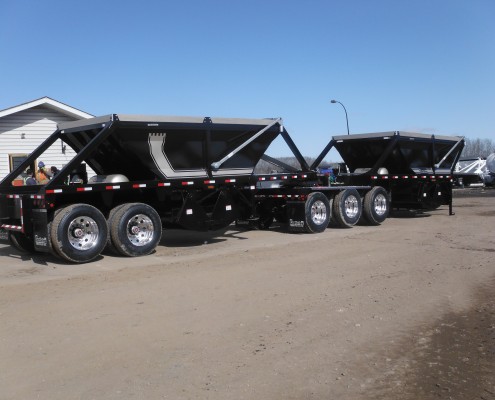 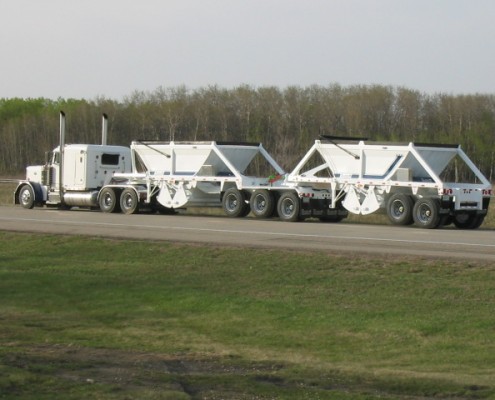 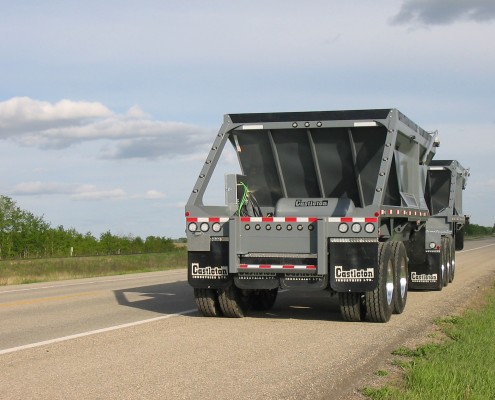 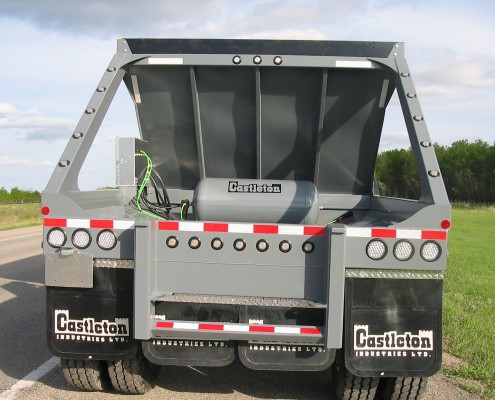 Check out our dealers page to find a trusted dealer closest to where you live and work.

We have some of the best trailers in the industry. If you don't see exactly what you like, let us know and we can customize a trailer to meet your specific needs.

Have a question about something you've seen or read? Give us a call and we'd be happy to answer any questions you may have.